Most people want and need 20/20 vision, which means they can see a specific line on an eye chart from 20 feet away. This is the reference point for “normal” vision. With 20/20 vision you can usually see everything you need to see. If you don’t have 20/20 vision, you may be nearsighted and need glasses or contact lenses to see objects that are far away. If you are farsighted, you may need glasses for reading and other close work. That is enough for most people.

Athletes are in a different situation. They would all benefit from better than normal vision. They need good peripheral vision, and they need to be able to see objects moving by them at blazing fast speed. Vision specialists have learned that they can actually test these abilities in athletes, as well as train them to improve the athlete’s vision.

Sometimes the tests are actually part of the training. While it is generally believed that athletes’ vision can be both tested and trained, the best way to do either or both of these things has not been proven. On the college and professional level, there are vision experts working on finding the best ways to improve the vision of athletes.

What are sports vision tests?

In general, these are tests used to measure peripheral vision and the ability of an athlete to see objects moving quickly under different lighting conditions. There is some equipment that has been made and any vision specialist can buy and use it. Some sports vision training experts invent their own specific tests. Many of the devices can be used to both test and train vision.

The first performance with specific equipment would be the test, and then the same device can be used to train the athlete. Tests can use simple objects or the most modern computer program. Many of the tests being used today are for baseball and softball players, especially useful for batting. They can be used to train other athletes.

• The Dynavision™ device tests and trains hand-eye coordination. This equipment is standardized, and there is an established procedure for use in evaluation and sports vision training. There are one minute training drills that measure hits and reaction time to hits. 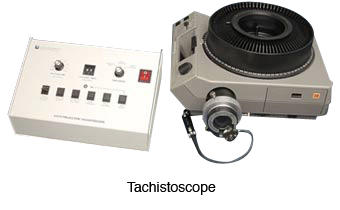 • The Tachistoscope improves what is called contrast sensitivity. Numbers are flashed on a screen increasingly quickly and using less and less contrast.

Performance on this device correlates generally with batting averages. 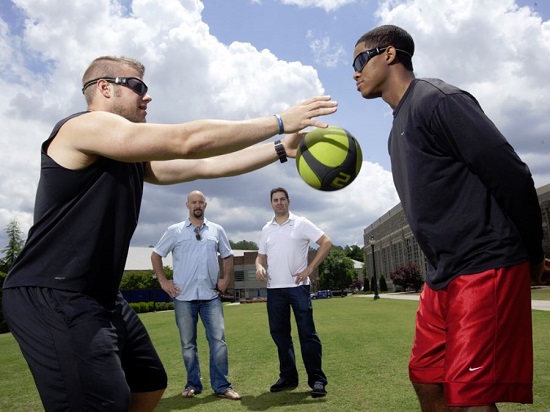 • Strobe glasses flash and temporarily block out visual signals to objects in motion. They flash quickly at the beginning which gives the athlete more chances to see an object as it moves, and then slow down which results in more time when the athlete has no visual input. The athlete’s brain has to imagine where the object will be going based on where it was seen before. This is to help the athlete envision where a pitch is going and helps with batting.

• A test done with a 3-D movie projected onto a computer screen which then also has shimmering objects measures depth perception.

• For baseball players, there is a test of timing in accuracy done with a lighted batting instrument. One such test is said to measure timing down to one thousandth of a second. 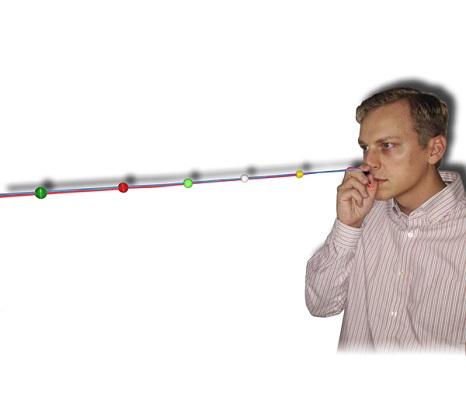 is an older and less high tech way to train vision. It consists of a string with colored balls. The athlete has the string in front of him or her at nose level and parallel to the ground. The athlete then practices focusing on each ball, one at a time, from front to back and back to front. This helps improve the speed at which the eye adjusts. Both the eye muscles and muscles inside the eye can be trained.

• The Eyeport is a manufactured and automated Brock string, using the same principles.

• Saccades are rapid eye movements done voluntarily. Charts are set up with random letters on a wall, both up and down and side to side, and the athlete looks at them one at a time and calls them out. They alternate charts and order, as well as doing this exercise while looking over their shoulders.

• Near far training has an athlete focus back and forth on cards 18 inches and 10 feet away.

An example of sport vision testing

At the University of Houston, Kevin Gee, a Fellow of the American Academy of Optometry and an assistant clinical professor with the UH College of Optometry founded the Sports Vision Performance Center in 2008. He initially worked with the women’s softball team, but as the center was developed, the team members of other sports started working with him.

He has developed tests specifically for tennis, soccer, football and baseball, in addition to softball. The teams involved at the University of Houston believe that their effectiveness as competitors has been enhanced by the training.

Another example: University of Cincinnati baseball players: a clinical trial

At the University of Cincinnati, the coach of the men’s baseball team began a sports vision training program in 2011 to attempt to use visual training to improving batting skills, specifically. They began by testing their players with many of the devices listed above. Their program was judged a success because the team’s batting average improved. It also improved their offense, such as ability to catch and throw a hit ball, although that was not the intent of the training.

Golfers need different kinds of visual training than athletes on the run trying to hit or catch a ball. They need gaze control, including what is called the Quiet Eye (QE), also called aiming fixation. This means that they have to learn to keep their eyes on the golf ball even slightly (milliseconds) after they swing. Elite golfers already do this, but all golfers can improve by learning or bettering their gaze control.

How is Quiet Eye measured and trained?

There is information all golfers can use about gaze control, for example, learning to keep their eyes looking at the back of the ball and not the clubhead. Now there is a way to measure QE with a device called the Applied Science Laboratories Mobile Eye Tracker. This device can be used along with a computer that has “Eyevision” software.

It uses reflections off the center of the eye and other data to measure the gaze of the person being tested. After testing, golfers can review their results and given specific advice as to how to change their focus. The Quiet Eye is also needed by basketball players when they attempt to make free throws. QE sports vision training has been shown in studies to benefit golfers and basketball players.

What does sports vision training do?

For most athletes at a highly competitive level, meaning at least college sports, there is always some area for improvement in vision. Vision specialists can use the results of tests to craft training to improve the deficient areas.

They almost always work on depth perception as well as the ability to perceive objects moving very quickly under different lighting conditions. Much of this is sport specific. The muscles that move the eyes can be trained, and the brain can be trained to react to data from the eye more quickly

Sports vision training is being developed and used to help college level and professional athletes. Some of the simple equipment and training methods can be used by athletes at other levels. There are even computer programs sold online purporting to help test and train an athlete’s vision at any level. This is an area of research among vision specialists.