This artificial eye works by stimulating retinal cells to produce neural pulses which pass through optic nerve to visual center in the brain. It works only for patients who are blind due to degenerative macular disease with damaged photoreceptors layer while the other parts of the eye such as optic nerve and nerve fiber layer of the eye act well and healthy. 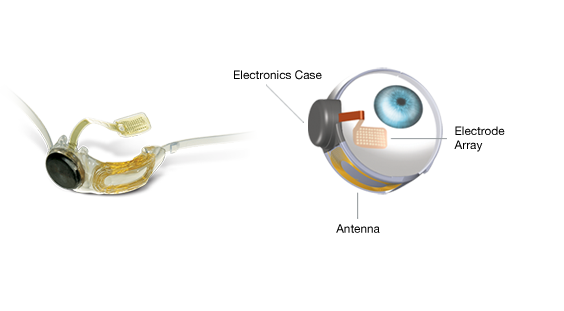 This device only works for patients with a degenerative retinal diseases that affect mainly the photoreceptor layer while keep the retinal cells layer intact such as retinitis pigmentosa.

The first bionic eye was approved in Europe ( United Kingdom, Switzerland and France ) for commercial and clinical use and it is called Argus II. It still under clinical trials in USA and needs time to be approved by FDA.

The Argus II Bionic Eye consists mainly of these parts:

Built into a pair of glasses. It captures images in a form of light and dark pixels. These images will be sent into a video processor.

Built into a hand-held unit. It converts images into electrical pulses that will be transmitted to a radio transmitter in the glasses through a cable.

Built in the glasses. It transmits the pulses wirelessly to a radio receiver.

It presents around the eye and it sends pulses to the retinal implant directly through a wire.

It consists of electrodes on a small chip measuring 1 mm by 1 mm. These electrodes will act like artificial photoreceptors. It is implanted in the epiretinal layer of the retina and near the optic disc. When the pulses reached the retinal implant, the electrodes will be excited and they will create an electrical signals which will be travel as neural signals through optic nerve to the visual center of the brain.