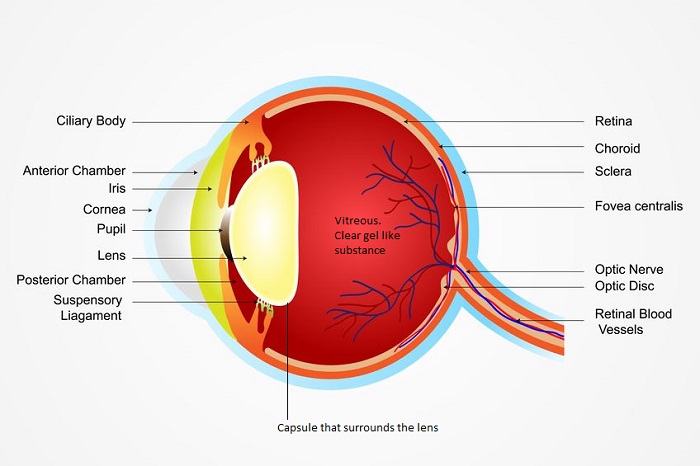 The natural crystal clear lens is completely surrounded by an elastic transparent membrane called the capsule and this capsule is attached by fibrous strands called zonules or suspensory ligaments which connect the lens and the capsule to the ciliary body.

Infront of the lens and capsule lies the iris with the pupil in the center and the anterior chamber which is space filles with clear fluid called aqueous humor. Behind the capsule lies the vitreous body.

Sometimes the back surface of the capsule is ruptured accidentally during cataract surgery and the vitreous which lies behind the capsule starts to move towards the anterior chamber.

Posterior capsule rupture during cataract surgery can increase the incidence of retinal detachment during and after the surgery because the vitreous is attached to the retina and when the vitreous moves forward to the anterior chamber, it can pull the retina with it, leading to retinal tears or holes which if not treated early by laser photocoagulation it can cause retinal detachment.

Sometimes,through this hole or tear in the back surface of the capsule, small pieces of cataract can drop to the back of the eye towards the vitreous and retina and most of the time,these pieces should be removed with another type of surgery called pars plana vitrectomy in which the surgeon will make small incisions in the eye to have access to the vitreous.